Basic Ping Pong Rules and How To Play 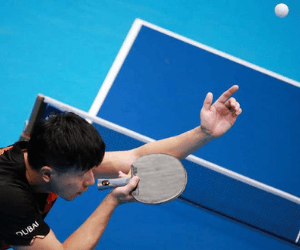 In their naivety, the basic fact many often remember about the basic ping pong rules or the game of table tennis generally, whether in doubles or singles, is no more than winning or losing a point.

So, if you ask how the points are scored, you’re not likely to get anything essentially different from ‘a miss for my opponent if he is unable to return the ball to my side after I have hit the ball over to his side of the ping pong table.

But are the rules all just about hitting or missing the ball or losing and winning points? This basic knowledge is good because the aim of any game is to play to win, lose, or draw. But it does not exhaust all we need to know about ping pong. The basic ping pong rules go beyond and are deeper than this ‘superficial’ acquaintance.

We need to know about scoring, serving (singles and doubles), and offenses, how points are won and lost. Even the tricks and tips on winning opponents are not that straightforward as many think about the ping pong rules.

Hence, if up till now you’re confused or nave about the official ping pong rules, this article is for you. Get all the information you need to know so that the next time someone asks you, you don’t just keep mute or refer them to the internet.

It is important to bear in mind that the edges (and not the sides) are considered acceptable as the legal surface of the tennis table. Also, it doesn’t matter who is serving, a player who successfully completes a rally and takes a two-point lead wins a match.

One important basic rule of scoring and winning in ping pong is that a point is scored after the ball has been put into play. The first player to hit the 11-point mark emerges the winner. Typically, the rule is that a table tennis match is the best of any odd. You remember your odd numbers in elementary mathematics: 3, 5, 7, etc.? Exactly. If you’re able to win 3 of 5 games, then you’re the winner. It is that simple.

But put in mind that a match can consist of as many as possible games; it all depends on the agreement between the opponents before the game starts. What that means is that if the game is prolonged to say 7 or 9, you’ll be required to win 4 or 5 respectively to emerge a winner.

Meanwhile, a winner must establish at least a two-point gap margin to win his opponent. That implies that if the scoreline stands at 10-10, it is deuce, and the game goes into extra play until a player gains a 2-point lead to win.

Don’t be childish with those old tricks! If you shake the table, touch the net or return serve with your free hand, you just lose a point to your opponent.

A serve is considered legal and acceptable only when the ball leans on an open hand palm of the server, and it is tossed up vertically at least 6 cm away from the server’s palm. The ball must not be hidden from the opponent who wants to receive the serve. Nobody wants your surprise package.

Additionally, the server must strike the ball so that it bounces first on the server’s side of the table before it gets to the opponent’s side.

A serve is legal only if it is diagonal (in doubles) or in a straight line (in singles). By being diagonal, we mean that the server takes one right half of his court to serve the ball to the opponent’s right half court.

A server takes two serves before the opponent takes over. This rule doesn’t apply when a game goes into extra play. During extra play, one player makes one serve and then switches to another.

The ball must leap over the net without touching it when serving. If the ball touches the net or clips it before it bounces on the opponent’s side, serve will be retaken, but the first serve attracts no score. This situation is technically called let serve. However, if the ball clips the net and returns to the server’s side, the opposing team or player earns a point.

A let serve can also be called if the player receiving the serve is not ready and makes no attempt to hit the ball. What if something external interrupts play? Once play is obstructed by objects or incidents outside the player’s control, a let serve is called, and you can retake your serve. This is common sense!

Unlike in singles, where service is always in a straight line, doubles entails two players standing at each end of the table. The decision of the team to serve first is a function of the agreement between the two teams, say X and Y, and this usually takes place at the start of a game.

Rule 6: Hitting the ball in Doubles

Do not run afoul of the rule in doubles when trying to hit the ball. Players at each end of the table will have alternate hitting the ball. For example, X1 should not hit the ball twice on the bounce. So, for instance, if X1 serves and Y2 receives, X2 should return the ball to the opponent’s side while Y1 again hits the ball back to team X.

You don’t just hit the tennis ball. The rule says that the ball must first bounce on your side of the table before hitting the back to your opponent’s side. If you violate this rule, you lose a point.

Similarly, never whack the ball at your opponent, but on the table. If your ball fails to hit your side of the table and goes straight to the opponent’s side, there’s ‘I’m sorry.’ You’ve simply missed a point. And that’s painful, you know. After all, this is not a dodge ball.

Typically, the color of a tennis ball is either orange or white. It is a 40 mm round in dimension. It is neither spherical nor completely circular. The standard measurement of a tennis table is 2.74 by 1.525 by 0.76 meters in length, width, and height, respectively. The rackets on either side should come in red and black colors. The table is painted lined with white color halfway on each side.

Basic Rule 9: Service and side switch

This is one of the most important basic ping pong rules. Each player serves two points in a row before switching to service to the other side. Meanwhile, if a score stands at 10-10, then each side takes one serve, earning only one point for a correct hit. The server is switched. Similarly, after each rally, the team or player at one end of the table switches to the other side. This applies after the 5th game.

Oh, sorry you’re old school. You don’t follow history. The scoring system has longed been changed in 2001. Well, for fun games, you can agree on 21, but ITTF won’t pardon you if you go to a competition with that ancient scoring model. Games end up in 11 points.

If you deliberately strike the ball twice in succession, my dear, you’ve just given out a point to your opponent. So, don’t ply that route.

Table tennis is one of the games with easy-to-understand and unambiguous rules. You don’t have to rack your brain before you understand. They are not cast in stone, as you may think. These rules can change from time to time. And who says they cannot? After all, it is a culture, and as you know, culture is subject to change. Keep yourself up to date with all the changing rules and never be found wanting in any of the rules. It doesn’t matter whether you’re signing up for a local competition, or you just want to have some fun with your lad who just returns from college.