Not all cars are created equal when it comes to susceptibility to theft.

According to the NICB’s latest Hot Wheels report, 748,841 vehicles were stolen in 2018, down 3 percent since the previous year. This change is consistent with downward trends in car thefts over the last almost-three decades. Since 1991 when car thefts reached their peak, automotive theft in the United States has decreased fifty-five percent. Even so, this crime is still a significant issue affecting hundreds of thousands of Americans. On average, 2052 cars are stolen every day. Considered another way, that’s over 85 car thefts per hour.

Car theft in popular culture usually involves elaborate heists and high-speed chases with sporty roadsters or sleek sedans with six- or seven-figure price tags. The reality is much less glamorous; professional car thieves generally are uninterested in jacking the latest McLaren or Bentley. Instead, they target popular and long-standing model lines, such as the Toyota Corolla or Honda Civic. These cars are then dismantled and sold for parts on the black market. Parts for popular models are in high demand due to the multitude of owners with the same model, and they generate more money than the value of the car intact. High demand for parts makes these cars lucrative targets for thieves.

The inconvenience of abruptly finding oneself carless is only a small consequence of car theft. Insurance premiums increase significantly after the incident, not to mention the deductible a victim will pay to replace their stolen car. Not only is the victim of a car theft affected, but whole communities feel the repercussions. Car theft increases crime rates, as thieves will often use stolen cars to commit additional crimes.

In the interest of public safety and awareness, this study concludes with concrete and cost-effective steps to prevent car theft. 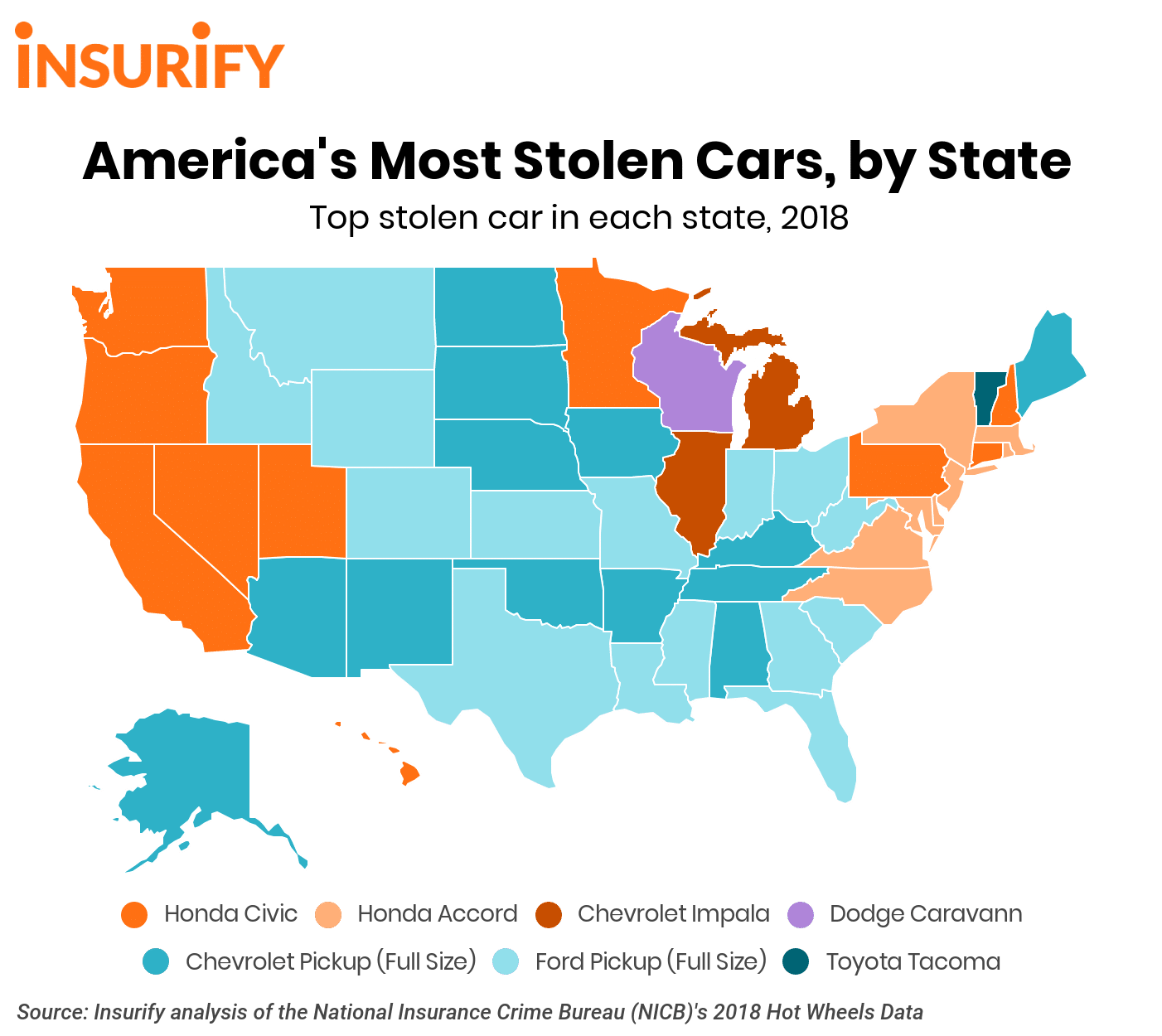 The data scientists at Insurify, an insurance quotes comparison website, referred to the National Insurance Crime Bureau’s latest Hot Wheels report to determine the ten most stolen vehicles in the nation. This report includes data on the number of thefts and the most stolen model year.

Insurify’s data scientists were curious to discover how often each of the top 10 cars are stolen in the United States. To do so, they calculated theft rates per 1,000 of each car model. First, they determined the proportion of each of the ten most stolen cars to all other car models. These proportions were determined based on the prevalence of each car model in Insurify’s proprietary database of over 2 million insurance applications. Then, they calculated the total number of each of the top ten car models on the road, by applying those proportions to the total number of cars on the road in the United States (272.48 million, according to the latest report by Statista). From these totals, they calculated rates of car theft per 1,000, based on the number of thefts for each model.

Top 10 Most Stolen Cars in America

Even though the Cherokee is the only SUV to rank among the ten most stolen vehicles, it’s not hard to see why thieves target this car. Not only has the Jeep Cherokee been popular for decades, but like many of the other vehicles on the list, this durable vehicle is also distinguished for its longevity. If maintained properly, this car can reportedly last well over 300,000 miles.

Since last year, Dodge pickups have been bumped one ranking from eighth place to ninth, thanks to a 6.5 decrease in thefts of these powerful cars. Dodge pickup owners may want to breathe a little easier due to this decrease, but in general, pickups are still highly coveted by car thieves. It goes without saying that remaining vigilant is crucial.

Things don’t bode well this year for GMC pickup truck owners. GMC pickups may rank eighth on this list, but they have the highest theft rates, at six for every 1,000. On top of this grim statistic, the number of GMC pickup thefts has increased by 7.8 percent since last year.

Thefts of the Toyota Corolla have remained about the same since last year, with only a 0.4 percent increase in incidence. Given the Corolla’s decades-long popular status among car owners, it’s not hard to see why this car consistently ranks high among car thieves taking advantage of the black market for parts.

The Nissan Altima is one of four cars on this list whose newer model years are most frequently stolen. In fact, the 2017 Nissan Altima was the most stolen new model of 2017, according to the National Insurance Crime Bureau (NICB). Total Altima theft incidences have not changed much since last year. Only 74 fewer Altimas were stolen this year compared to last year, representing a mere 0.6 percent decrease.

Theft rates of this popular sedan have decreased by only 2.2 percent since last year, but 2017 remains the most popular car year for thieves. The Camry is the fourth car on this list wherein recent model years are desirable to thieves, which begs the question: exactly how effective are newer antitheft systems at fending off professional thieves?

Chevy’s marketing campaigns tend to highlight the longevity of their pickups, which attracts car buyers and thieves alike. In fact, thefts of Chevy pickups have increased 5 percent since last year, a change that is consistent with upward trends in pickup truck thefts.

We weren’t surprised to see Ford pickups ranking third this year. Notoriously easy to break into and highly sought-after on the black market for parts and whole vehicles, Ford pickups are the perfect target for a thief. Theft rates of Ford pickups have risen slightly, by 3.6 percent, since last year.

Even though the Accord has maintained its second-place ranking since last year, thefts of America’s favorite car have decreased significantly since last year. It may be surprising to see that 1997 Accords remain the most stolen model year, despite being well over twenty years old. But to some unsavory types, the appeal of these cars is their age. 1997 Accords were built with a fatal flaw: as the ignition in these cars ages, it becomes so imprecise that anything fitting in the keyhole—including the handle of a spoon—is enough to start the engine.

Another Honda make is in the top 3 most stolen vehicles this year, the Civic. Although the Civic wins the notorious title for the most stolen vehicle of the year, one statistic is encouraging: in a similar trend to theft rates of the Honda Accord, Honda Civic thefts have decreased 14.7 percent since last year.

How can you prevent car theft?

How to make sure you aren’t buying a stolen car

If you have questions or comments about this article, please contact insights@insurify.com.